Shaping the Future of Manufacturing 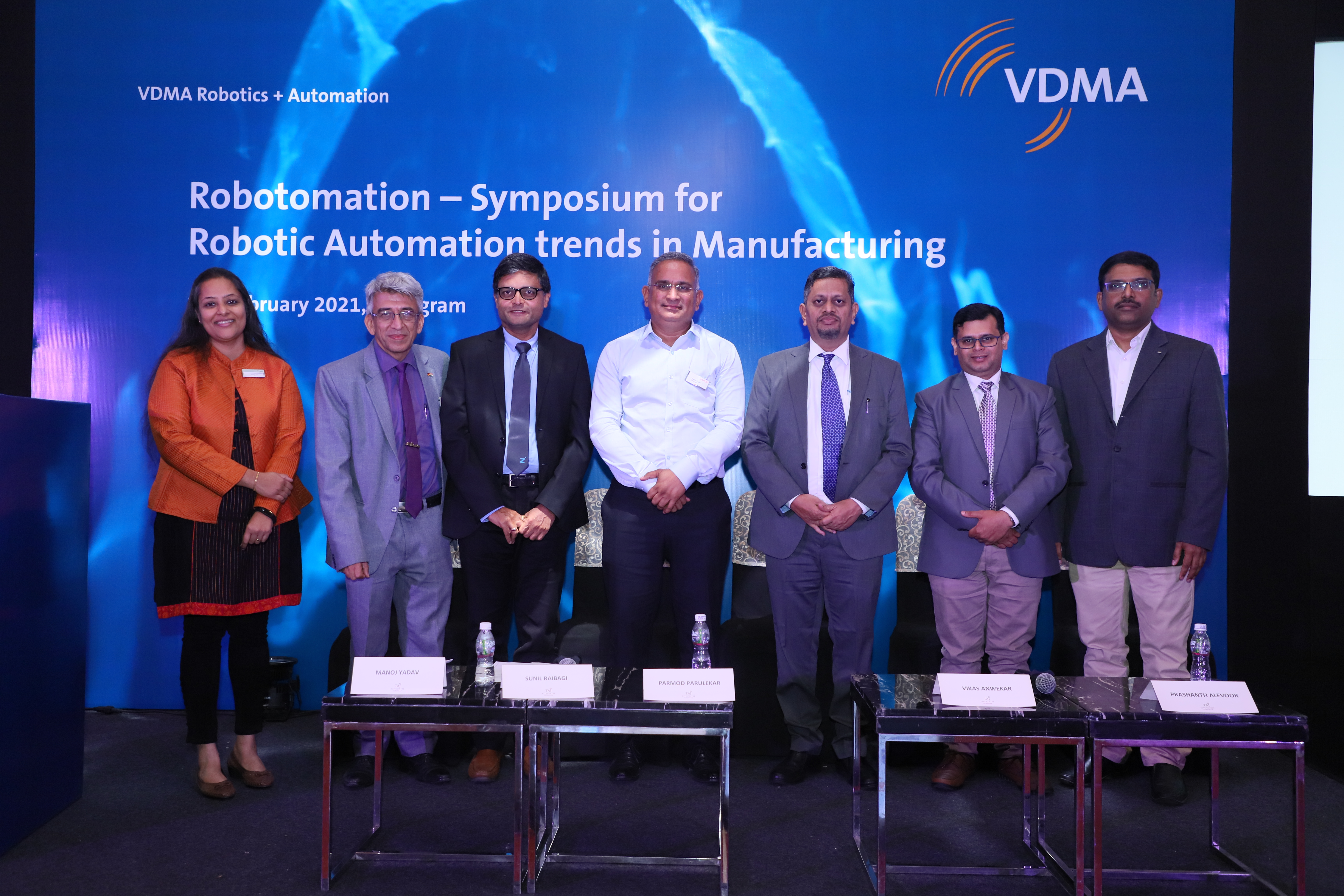 It has become imperative for organizations to find ways to bridge the skill gap to stay ahead of the curve, which can be achieved by either recruiting the right people with the right skills, or by helping their existing employees stay relevant by upskilling them. The gradual integration of robotics and automation in the workplace has begun, transforming the nature of roles and functions in its wake. Hence, employers realize the need for the construction of a system that can support human and robotic interaction with automation driving significant changes in the workplaces.

Against this backdrop, the Symposium focused on the worldwide robotics and automation trends for the Manufacturing sector. Despite the prevailing circumstances around the pandemic, around 200 delegates from the Automotive, Tyre & Wheel Making, Machine Tool, Food & Beverage and Water industries attended the event.

In his keynote address on ‘The Global Robotics and Automation Boom’, Patrick Schwarzkopf, Managing Director, VDMA Robotics + Automation & Member - Executive Board, International Federation of Robotics, focused on India’s progress in harnessing the benefits of robotics and automation technologies for its Manufacturing sector. The country has witnessed dynamic growth of industrial robotics – CAGR (compound annual growth rate) of over 15 percent p.a. between 2014 and 2019 in installations.

Dr Joerg Polster, Minister & Head - Economic Cooperation, Embassy of the Federal Republic of Germany, New Delhi, (through video conferencing) highlighted ‘Make in India’ and ‘Self-Reliant India’ (Atmanirbhar Bharat) policies that are poised to play a major role in the Automation industry. He underlined the growing importance of automation with the pandemic today and the world markets going more local in comparison to global manufacturing trends.

Rajesh Nath, Managing Director, VDMA India, said, “It is worth bearing in mind that artificial intelligence, automation, IoT, and robotics are becoming more prominent. The pace of technological advancement and the rate at which professionals update their skills are already causing the skill gap to become more expansive. Further the viral outbreak has further accelerated the digital transformation within the global business ecosystem.”
Automotive industry largest adopter.

Presently, the Automotive industry is the largest adopter of robotic solutions in India. The passenger vehicle segment clocked a growth of 11.14 percent in January 2021 at 2.76 lakh units, thus remaining in the positive territory for the sixth straight month, against 2.48 lakh units in the corresponding month a year ago. Other segments including Food and Beverage, Consumer Packaged Goods, Electronics and Logistics industries are also starting to adopt automation and robotics at a much faster pace.

Automation on the rise

An interesting panel discussion on ‘Role of Robotics + Automation for the Manufacturing Industry’ was moderated by Nath. The panel composed of industry experts such as Rajachandran Madhan, Director, Indo-German Science & Technology Centre (IGSTC); Achintya Lahiri, National Head- Packaging Development and Engineering, Hindustan Coca-Cola Beverages Pvt Ltd and Rajiv Wahi, Chief Executive-International Business (EAM), Escorts Ltd, who drew attention to the increasing use of automation in manufacturing and even in their own factories. They stressed on the adoption being economical and viable for the SME and MSME industries, and highlighted the need to educate the Indian workforce on the adoption of automation.

The passenger vehicle segment clocked a growth of 11.14 percent in January 2021 at 2.76 lakh units, thus remaining in the positive territory for the sixth straight month, against 2.48 lakh units in the corresponding month a year ago.