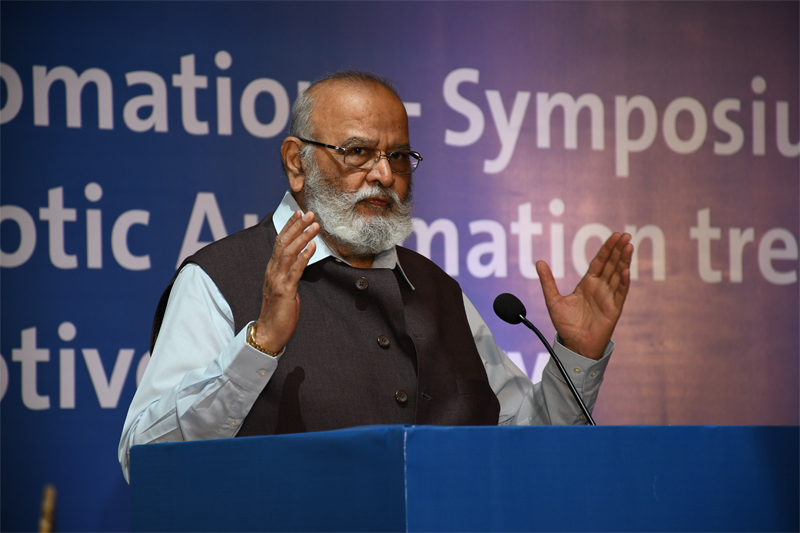 With the auto industry undergoing an unprecedented and colossal change, thought leaders recently got together at a symposium organized by VDMA India titled ‘Robotomation – for Robotic Automation Trends in the Automotive Industry’ to reflect on the industry’s evolution, offer their take on the shift towards electric powertrain and shed light on the current and the upcoming robotic automation trends in the industry. An excerpt from the valuable insight presented by Dr Abhay Firodia, Chairman, Force Motors Ltd...

Past, as Important as Future

Owing my 50 years of working experience in the automobile industry, it would not be out of place if I started with the past before moving on to the future.

It is known that the first electric automobile was displayed in Germany in an industrial fair by Siemens in 1885, which is more than 130 years ago. So, the electric vehicles are not so novel. Although they did not work commercially since the batteries were very heavy and had a very low power density, the basic approach was still known.

From 1885 till the first World War, automobile industry was dominated by Europeans – specifically by inventors like Rudolf Diesel, Gottlieb Daimler and Karl Benz, etc. They created basic innovation.

Between the two wars, America became the center for global economic activity. Americans brought mass production and scale to the automobile industry. Europeans lead in innovation while Americans in manufacturing to scale, to reduce the costs and enlarge
the market.

After the 2nd World War and the Korean War, the Japanese and later Koreans innovated with small, beautiful, high-quality vehicles, compact manufacturing processes, and new organizational approaches. Today, we have the Chinese making at a big scale.

From assembly lines manned by humans, now increasing use of Robots will be seen. Understand that if your automobile industry had about 40,000 robots in 2017, the number is going to increase to 3.4 million by 2025, mere 6 years from now.

As we go forward, Robotics will be a very important element of what is going to happen.

Technologies that can alter the way of life

Besides Robotics, four technologies are expected to dominate the evolving socio-economic scene of the world.

Electric vehicles to be a Gamechanger

It is estimated that by 2023, which is just four years away, around 26 million electric vehicles are expected to be operating in the world. Also, they will be 30 percent cheaper to operate than ICE vehicles. The reason electric vehicles are not affordable as yet is because batteries are still too expensive. But they will soon be dramatically cheaper. What Henry Ford did to the automobile industry in the early part of the 20th century was that he made the automobile affordable. By mass production he brought the cost down. People thought that he was only mass producing, but he was looking ahead to enlarge his market, which was not possible without reducing the cost of the automobile. Same thing will happen to electric vehicles. Once the battery cost goes down, affordability of electric vehicles is going to increase exponentially, transforming the world. It will not allow older technologies to survive or compete. There will be huge disruptions and the industry and the society will have to learn to cope and adjust to these changes.

Let me give you an example of how, with persistent efforts, technology evolution happens in an effective manner. Ten years ago, I was invited to visit a Daimler subsidiary near Stuttgart that makes fuel cell engines. They showed me the first-generation fuel cell engine that they had made in the 80s, which was very large and bulky. Its weight was heavy, and the volume was so big that when installed in a vehicle, there was space only for the driver. There was just no space for any passenger or cargo. Within 25 years, in well-defined steps, they created the third and the fourth generation engines that were nearly the size of a normal automobile IC engine. In this time span, evolution happened to reduce the size of the engine, improve its efficiency, quality, and reliability, making it increasingly workable. This is the convergence of technologies of manufacturing, chemistry, electricity, and automation in production such that the cost comes down. The fuel cell engine will also emerge as an important new technology.

Robotics is going to play an important role towards leveraging the rate of production so that costs come down. It does not necessarily mean reduction in employment, but there will be a huge change in the type of employment that will be available. So, when we go forward using all these technologies, the product that will be produced is going to be much more efficient.

With regard to the manufacturing processes of the past, I remember when I started work, 90 percent of the machines in the company were individual machines that had to be operated manually with levers. Whether they were lathes or milling machines, this was automation at its basic level. Then came the era of transfer lines, which was the first generation of mass production where a number of machines were interconnected, and sequential processes were carried out. This happened in the 70s and the 80s after which came CNC machines and the flexible machining centers, where smoothly one machine could perform many things. This was quite a high level of automation and industrialization, and now it’s the turn of robotics.

In the 1970s, when we installed the first pick and place robots in our die casting foundry, it was an event for celebration. I had called the Board of Directors who were thrilled to see a mechanical man picking up stuff and spraying the die. That age is gone.

Today’s robotization is far more miniaturized, much more capable, and highly productive. This shows that the trend evolving in the industry is that simpler processes are turning integrated and accurate, leading to quality and economy.

It is estimated that by 2023, which is just four years away, around 26 million electric vehicles are expected to be operating in the world. Also, they will be 30 percent cheaper to operate.