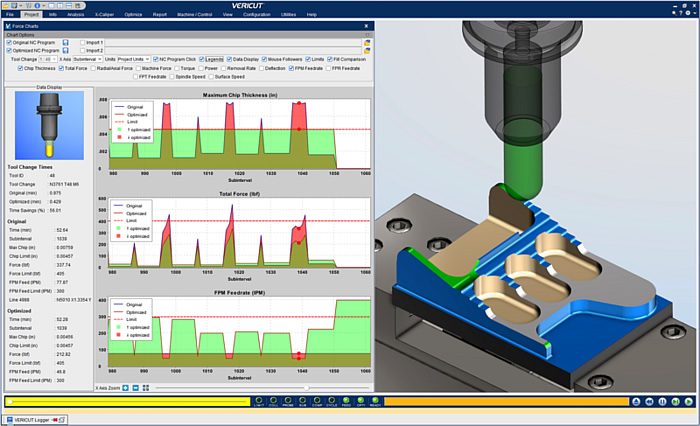 Simulation ensures programs are error free and all operations work together as intended, but optimization ensures the whole process is operating as efficiently as possible to save time and money. Here's knowing how has VERICUT CNC simulation and verification software from CGTech helps to achieve that…

As machining gets more complex and customers expect more for less, there is room for improvement in any manufacturing process. These improvements, which are not just about reducing costs, might include reduced NC program runtimes, increased throughput, making parts cheaper or getting a product from start to finish and out to market faster.

There are some significant warning signs that will indicate when process optimization is clearly a must in a manufacturing business – missing delivery dates? Losing out on bids or not as competitive as rivals? Lost contracts and unsatisfied customers? Or declining profits?
Every level of the manufacturing process that a job goes through requires careful planning and communication and the aim of manufacturing is to make it through each step as quickly and efficiently as possible, with the least cost incurred. In a typical manufacturing workflow, VERICUT resides between CAM programming and machine set-up.

CAM programmers know that modern machines move so fast it is pretty much impossible to stop them before a crash occurs. VERICUT CNC simulation and verification software does a superior job at finding problems lurking in NC programs and warning of unexpected machine behavior, even those occurring between multiple set-ups. It lets programmers resolve these issues before they reach the shopfloor, crash the machine and waste valuable machine time.

With VERICUT, the shopfloor can be confident that programs will run correctly. Verification will show if there are any errors or any areas that cannot be reached by the machine or the tools due to fixturing interference. Machinists do not have to worry about crashes, and they do not have to waste time proving out because it’s already been done between the VERICUT and programming stages.

Having access to the free VERICUT reviewer at the machine tool to check the simulation against reality at any time is a huge benefit to both the shopfloor and programmers as it avoids the ‘what happens next’ disturbances during one off or first off production.

There is also a positive ripple effect for other departments that coordinate with programming. Engineering and design can learn through verification if parts can be manufactured or if changes need to be made before metal cutting. Planning and scheduling will have more accurate cycle times and they will not have to schedule prove-out times on the machines. The quality control and inspection team can expect higher levels of conformance and fewer issues which makes it easier to approve parts and get them delivered. These are all areas where VERICUT is helping save time and money.

But there are also the hidden issues, inefficiencies and missed opportunities to optimize processes that erode profit margins. Things like poor cutting methods, non-optimal feedrates in new and existing NC programs, over- or under-utilizing cutters and/or machine tools, all of which can be draining money with every part made. Some companies work really hard and diligently optimizing programs but there are opportunities and savings to be had for all machine shops. This is where Force and Force analysis charts come in.

VERICUT Force recalculates feedrates to maintain ideal constant chip thickness while simultaneously reducing feedrates when needed to maintain safe cutting forces and spindle power, and it does this for each tool. Force is based on calculations and proven cutting data that has been gathered from tooling manufacturers, material specifications and dyno testing.

It uses very specific cutting parameters, takes into consideration what kind of material is being used, as well as tool type and geometry. It couples this with the cutting conditions that VERICUT collects to give the best data that can be used to analyze and optimize the NC program.
Force charts visualize what is happening during the machining process and expose areas of opportunity that exist in each NC program, such as erratic chip thickness, chip thinning and inefficient CAM paths that can all be resolved by optimizing feedrates. The charts also show areas of concern, for instance where the force exceeds what the tool is capable of, such as excessive cutting conditions or potential for chatter, broken/chipped cutters, or damage to part of the machine. In these instances, VERICUT Force will lower the federate to keep the force under the limit of the tool’s capability.

The impact of optimizing is dramatic, including reduced machining time and longer tool life, which will help the shopfloor by giving more machine capacity and maybe even postponing the purchase a new expensive machine. There will be less post machine clean up because produced parts will be better quality, saving even more time per part. Programmers are going to benefit from having correct speeds and feeds information to achieve consistent machining results. All these positives reach all the way back to the quoting and estimating and mean manufacturers can be more aggressive and competitive with schedules and bids. Simulating, verifying, and optimizing simultaneously with VERICUT Force equates to a cumulative effect on process optimization, resulting in significant time and money savings.

VERICUT CNC simulation and verification software does a superior job at finding problems
lurking in NC programs and warning of unexpected machine behavior, even those
occurring between multiple set-ups.