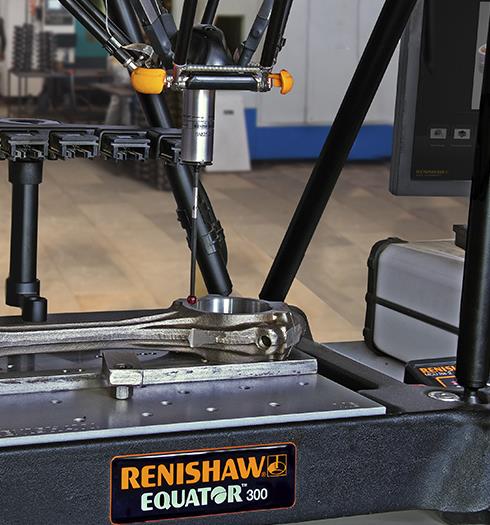 Leading manufacturer of connecting rods for major names in the car, compressor, heavy commercial vehicle, tractor, marine engine and earth mover manufacturing industries, Kishan Auto Parts was founded by Shantibai Changela in 1988. It started off by manufacturing 2,000 connecting rods per month and today manufactures up to 50,000 per month with 360 variants. The company’s customer list reads like a who's who in the world of cars, compressors, heavy commercial vehicles, tractors, marine engines and earth movers.

Kishan exports 90 percent of its production to leading industrial and developed nations including the USA, the UK, Germany, Singapore, Italy, China, Poland, Brazil, and the Netherlands. The company has a reputation for high quality within required tolerances at a competitive price. It specializes in manufacturing connecting rods from raw material to finished product within their own forging plants, with a lead time of 60-90 days. In need of a faster inspection system

For many years, Kishan Auto had been using air gauges for checking diameter, circularity and ‘bend and twist'. For each of 360 variants of connecting rod, the company used three or four different gauges. On larger connecting rods for heavy use applications, this could be at a 100 percent sample rate.

In Kishan's experience, these hard gauges usually lasted up to 10,000 uses, and then had to be reworked. For each different connecting rod, three of the four gauges costed `6,000 (approx US$120), while the display costed `30,000 (approx US$600). However, with the fourth gauge, for measuring ‘bend and twist', the cost went up to around `3,00,000 (approx US$6,000). This included a golden part which could be easily damaged and often had to be replaced.

Cutting the cost of gauging

Time and the ability to cope with temperature were not the only issues for Kishan Auto; the cost of gauging was more important than all. The company identified 77 variants of connecting rods which the Equator system could accommodate. The operators use the system to measure 500 units per day in a 10-hour shift.

For testing each part, the whole process took more than 8 min. With increased demand for its products, Kishan Auto needed a faster method of gauging.

If Kishan Auto were to invest in hard gauging for all 77 variants, it would mean an investment of `23 million (approx US$450,000), just for the hardware alone. There were also other costs to consider, such as skilled labor to set up and maintain these gauges, storage, and running costs.

Managers from Kishan Auto were in Germany for business meetings and to visit the EMO Hannover exhibition. After having searched without success for more than two years for an inspection system that could achieve the speed of operation they required, they did not have high hopes of finding a solution. It was only as they were leaving the show that they spotted one of the Equator system demonstrations at the Renishaw stand which was gauging a connecting rod. It was a chance encounter that ultimately solved their problems. They requested a demonstration within a few days of returning to India, and having seen the Equator gauging their own parts, immediately decided to purchase a system.

Versatile gauging on the shop floor

Kishan Auto is now using Equator to gauge multiple variants of connecting rods, and is adding more every day. Typical gauging time of 55 seconds per connecting rod is a significant reduction over previous methods. The operators can use one Equator machine for many different parts, gauging all the features in a single operation with an immediate pass/fail decision, along with a report of the component dimensions.

Despite its location in Rajkot,

Gujarat, where temperatures soar to 40°C (104°F) and drop to 19°C (66°F), Kishan is seeing repeatable results from its Equator system. This is achieved by re-mastering at least every three hours, or when the team notices that the temperature has changed significantly. ‘Re-zeroing' the system removes the effect of thermal growth from the measurements, and, therefore, guarantees component quality. The master part must be kept close to the machine and subject to the same thermal conditions as the production parts. If, at any time, the ambient temperature changes rapidly and a part goes out of tolerance, the operator can measure the master part to re-set the system and check whether the reported ‘fail' is not due to the environment.

The master parts are ‘calibrated' on Kishan's CMM, which gives them the traceable accuracy they rely on to guarantee quality. However, the high thermal variation means that the CMM has to be used within the company's temperature-controlled room. Equator gives Kishan the opportunity to extend the certified accuracy to the shop floor whatever the conditions.

For this particular requirement, Equator has removed the need to purchase an additional CMM with scanning capability, as Shantibhai Changela, Managing Director, Kishan Auto, comments, “Essentially, Equator and CMM complement each other perfectly, one providing traceable certified accuracy, the other providing thermal capability and extra capacity.”

For Kishan, quality is the result of the right work ethics and processes for both management and operators, plus having the right equipment to achieve the required aims. The introduction of the Renishaw Equator gauging system has significantly enhanced quality. The company is now in a position to operate 100 percent inspection of components, quickly and easily, and is happy to guarantee a 100 percent quality assurance on all its parts.

As Changela comments “Quality is critical to us. We constantly strive to achieve 100 percent quality, improving efficiency and passing those savings on to the customer. Equator has taken us to another level.”

With increased demand for its products, Kishan Auto needed a faster method of gauging for its Connecting Rods. It also needed a solution to bring down the cost of gauging.

Renishaw Equator™ Flexible Gauging System that helped the company achieve a significant reduction of 80% in cost and gauging times, with the flexibility to gauge many different parts with an immediate pass/fail decision.

The company now operates 100% inspection of components, quickly and easily, and guarantees a 100% quality assurance on all its parts.